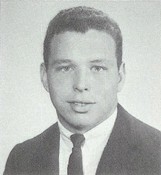 On January 31, 2013 Susan Morgans reported that Barry Eby informed her that Jim died of lung cancer a few months ago.   We have no other information at this time.

Bob Niebaum, our Co-Administrator, has located the Obituary for Jim which follows:

James Kenneth Shannon Jr. Shannon, James Kenneth Jr., 65, of Plantation, passed away Thursday, October 25, 2012. Born February 15, 1947 in Pittsburgh, PA, Jimmy, as he was known as a child, grew up surrounded by family, playing sports, and following his beloved Pittsburgh Steelers. Upon completing college, Jim moved to Fort Lauderdale and found a job as a high school mathematics teacher and football coach. It was there, Nova High School, that he would meet the cheerleading coach and his future wife, Brenda. They wed in 1972 and had two daughters, Amy and Susan. Together, their family would enjoy yearly road trips in their van: no matter the destination, the journey was always the real treat. He and Brenda would remain happily married for forty years, weloming two sons-in--law and five beautiful grandchildren to their family. During those years, Jim became "Honey", "Dad", and "Pap Pap" and was the living example of a devoted husband, a loving father, a proud grandfather, and an overall great man. He ended his two-year battle with cancer on October 25, 2012. Jim is survived by his wife, Brenda; daughters Amy (Jason) Spector and Susan (Fred) Maxik and five grandchildren, Ian, Emily, Dylan, Zachary, and Sam. He will always be a hero to those who knew him best and will last forever in their hearts. A memorial service will be held at a later date. In lieu of flowers, the family requests that any donations go to National Lung Cancer Partnership or Hospice at www.nationallungcancerpartnership.org/donation, or www.vitascharityfunds.org. Arrangements entrusted to Kalis-McIntee Funeral & Cremations Center, Wilton Manors, FL. Online condolences at kalismcintee.com. Published in Sun-Sentinel on October 30, 2012.