Sheila Moore Ross ('65) sent the information on Sara Lee.  I am checking to see if there is additional information.  Sheila did not know the cause of death, but she leaves behind her husband, Doug, and two daughters. 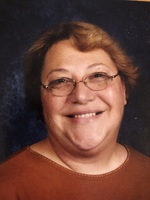 On Sunday July 29th, 2018, Saralee (Ton) Fassett, of Woodbridge, VA., passed away. She was preceded in death by her mother Rose Shank, her Uncle Jim DeCarlo, her Grandmother Sara DeCarlo and her Grandfather Anthony DeCarlo. She is survived by her husband of 46 years Doug Fassett, her daughters, Alissa DeCarlo and Kimberly Fassett, her five grandchildren - Anthony, Lilli, Cyrus, Mia and James and her brother Joseph Shank.

Saralee was born on August 13, 1947 in Pittsburgh, PA. She attended Gettysburg College where she was a member of the Academic Honorary Society Sigma Alpha Iota, the Owl and Nightingale Theater Group and the College World Tour Choir. She sang in solo and choir performances all across the United States and Abroad. In 1969 she graduated with a Bachelor of Arts in Music. She received her Master’s Degree in Music Education from George Mason University. She taught Elementary Music in the Prince William County School System for over thirty years. She performed with and was musical director for many community theater groups throughout her life - Manassas Choral Society, Prince William Chorale and Pied Piper Theater to name a few. Throughout her life she was involved in productions such as Carousel, HMS Pinafore, Music Man, Oliver, Oklahoma!, Brigadoon, Godspell, Jesus Christ Superstar, Shrek The Musical, Mary Poppins, Beauty and the Beast and - most dear to her heart - Fiddler on the Roof (Twice, 20 years apart, performing next to her husband). The influence she had on her students and colleagues will be felt throughout the Northern Virginia theater arts community for years to come.

A celebration of Life will be held for Saralee on Sunday August 12th from 2pm-5pm at the Center for the Arts in Olde Town Manassas - 9419 Battle St. All friends, far and wide, are welcome to attend.

Saralee spent a better part of her life sharing her love for theater and music with children. She believed that arts programs were necessary to a child's education. She believed that choir, band, theater, visual arts MUST be taught in all schools and enhanced through programs throughout the community. It is in this vain that "The Saralee Fassett Theater Arts and Music Scholarship Fund" is being created. It will provide scholarships to children for theater, arts, and music camps at Center for the Arts or Pied Piper Theater memberships. The family asks that in lieu of flowers donations be made to this scholarship fund.